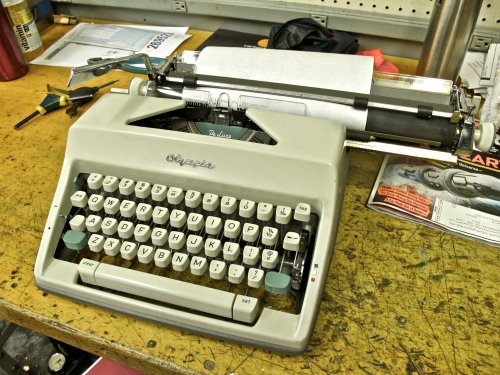 OLYMPIA SM 9 Wide Carriage… Currently at the Cambridge Typewriter Spa. Can’t wait to write some run-on sentences with this one. Actually the last of the SM 9s to arrive.

This SM 9 has small type; it had a big price–got it from Mr. Typewriter, fully gone over.  It does type beautifully.  Perhaps the machine to tackle that 50k novel affair in November? 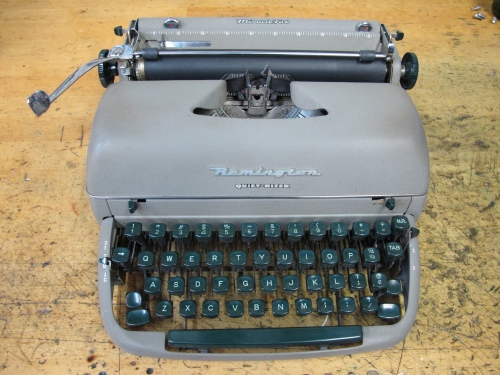 Okay, a Remington Quiet-Riter which came just after the Type-IN…. needs a little tuning, but I think it’s going to become somebody else’s nice machine very soon.  It’s not Rite for it to sit around unclacked. That’s too Quiet. 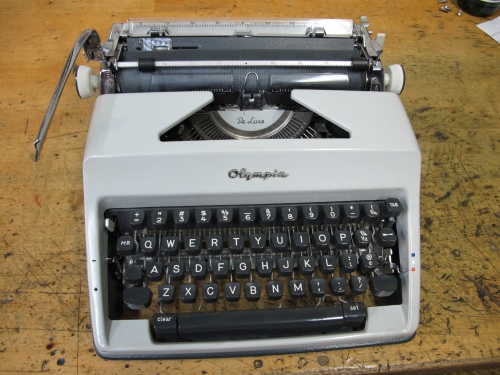 Er, yes, If I like something, sometimes I do go overboard, as though they might go out of production; except these SM 9s already did.  Not to worry, this one’s been sold to our mechanic Tom.

SMITH-CORONA Classic 12… a nice machine. A fellow brought it by, a friend of his mom’s left it at their house decades ago when she moved to the West Coast.  It has Power Space and those interchangeable key tops.  This is another typewriter that I like, but that will be moving on; I can just feel it’s best to be on show in someone’s writing room.

OLIVETTI LETTERA 32 — This one was made in Barcelona… which alone has got me. My spouse and I spent all of 1992 in that beautiful city, teaching English and watching the Vespas zip past the Modernist buildings, and scrimping to buy some olives and champagne. Tom from Cambridge saved this typewriter from oblivion, replacing its mainspring and etc. Man those Italians, with that bit of dash, just saying, “I shall put the red key HERE. Now, it’s finished and we get some espresso.”

Olympia SF Cursive.  Oh, man, one suave typewriter that you have to put some nice bottles of wine behind before taking the picture.  Bought cheap on eBay, it was shipped with like, one packing peanut and bashed up. Nursed back to health by Cambridge Typewriter–getting monotonous, eh?   Adwoa’s cursives led me to seek this one out.  Some day will write a play where one character speaks in fluent Cursive.

OLIVETTI Lettera 32 — This one’s from home base–Italy.  It stays at home, mostly, while the BCN model is at the bike shop.  If I find one in cursive, I will stop buying them–maybe. 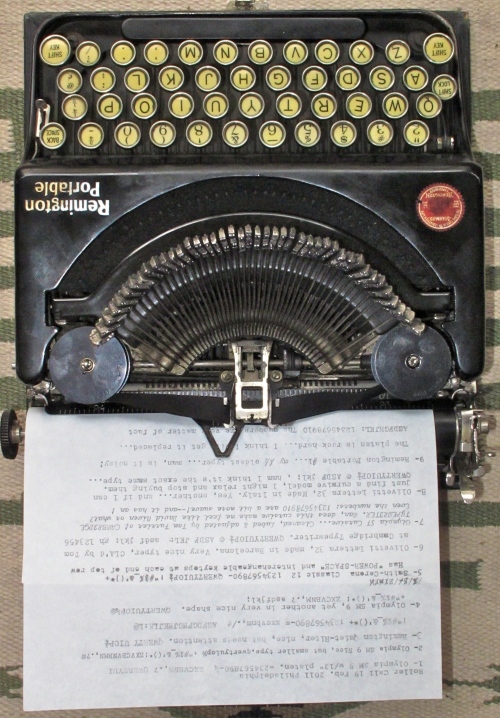 REMINGTON PORTABLE #1.  “If you like, I can just cut off the keys and send them to you.”  Er, no, that won’t be necessary. (you murderer you)  Thank you I’ll take the whole thing.

Here’s your $24 for this 1924 (I think) machine.   A little compressed air and some light lube and Martin Remy (just named him) types like a dream, if a noisy one, thanks to that rock-hard platen,

someday to be replaced. Sorry for the upside down, but was struck by the idea of the words sheltering ‘neath that arch of typebars.

ROYAL Multi-Touch. Mr. Matt Cidoni brought this to the first Type-IN, determined to get my Hermes Rocket. He did, and we both think we got over.  This machine has an almost sinister gloss to it.

It also has the smallest typeface of any of the machines I own. Has to be typed on in a clean, well-lighted place.

Smokie the cat is certain that I will take this SM 9 back downstairs shortly so that she can stretch out properly.  This one is for home, the other two are at the bike shop. That’s reasonable, don’t you think?

OLYMPIA SM 3.  Bought this as a Christmas gift for son Andy. He’s pecked away at it a bit. But not in love with it.  On the other hand, I said I might sell it and he said, NO. Definitely the most

handsome machine in the entire fleet.

I agree that this is too many typers and will have reports when they are placed in new homes.

7 responses to “Too Many Typers?”