Well, for WTD, decided to make use of a lovely electrical outlet right along the bike path near my house–loaded up a bike trailer hitched to the trusty Brompton folder bike with an IBM Selectric II, a long cord and a little school desk. Stuck an Olivetti Lettera 32 in the Brompton front bag and rode  7/10 of  a mile to the spot, right next to the Schuylkill.

Felt a bit like a snafu at first as runners and cyclists zipped past, not even bothering to look at the printout of the original Sholes, Glidden and Soule patent from June 23, 1868–much less the sheet proclaiming it World Typewriter Day. But soon enough some more curious types gave the Selectric a try. 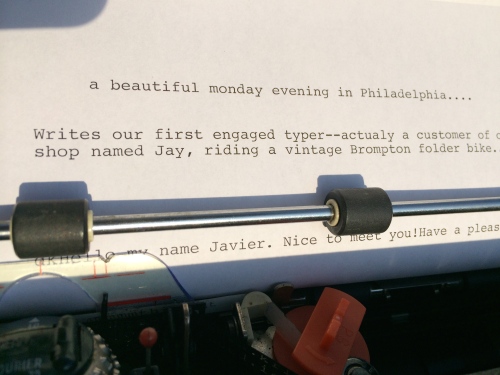 Jay and Javier weigh in for World Typewriter Day

Sadly, I was unable to follow through on R. Polt’s “alternative materials” suggestion. I had brought along a couple Chemex coffee filters to type on, but never got them out. Also a bit miffed that no one took me up on some suggested letter targets: had brought a sheet with the mailing addresses for President Obama, the Pope and Benedict Cumberbatch, among others. Maybe at the next Type-IN? 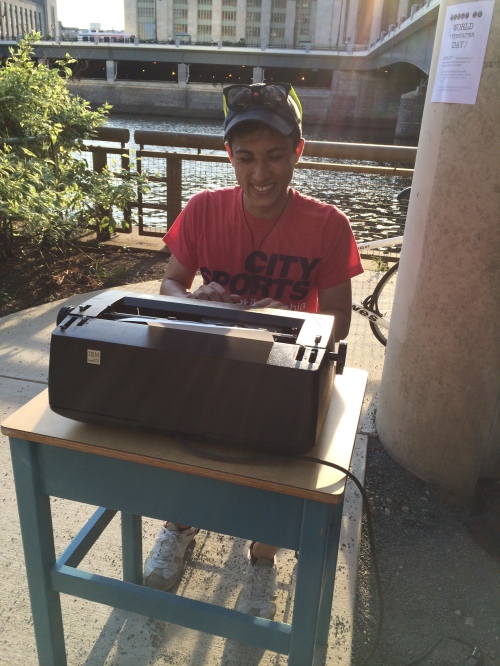 But this young man, a recent Upenn grad, did take the time to write a quick letter to a family member–I lent him a fountain pen to sign it with. Both action were firsts for him, I believe, and I suspect, for the letter’s recipient.  As the sun dipped low, loaded everything back onto the trailer and was home in time for a little dinner. Bless you, U.S. Patent Office, for making this World Typewriter Day possible.

PS -An hour later, the mailbox had a snack, clunking its satisfaction at the evening treat from our Penn grad, now a consultant for Accenture.